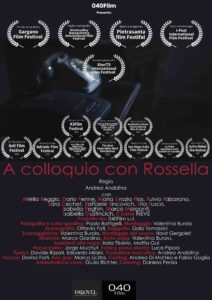 040film Ltd. is an independent company which deals with film and television series production and development. It was born thanks to the work of three authors, Andrea Andolina, Valentina Burolo and Elisabetta Bernardini. The group collects the previous experiences of the authors in the field of cinema and of television and theater as well.  Andolina and Burolo have actually been working together for over twenty years; they have collaborated with RAI Radio Televisione Italiana and in several theaters. The company is born on their first cinema set, the short film by Andrea Andolina “LA CURA”. The three colleagues decide to fund the company 040film, and create quality cinema products. Since then they have produced short films, video clip for young song writers and adverts. 040film also works with animation in stop motion. This field of work has been deeply wanted by Andolina, a lover of the genre, especially after his experience at the Spain workshop with the famous  Tim Allen. The vision of 040 Film is to produce quality cinema products inspired by literature, with a particular focus on the issues of the more vulnerable sections of the population. At the moment, 040 film has in pre production and in development: a stop motion short film against the consumption of plastic, “PlasticLove”, written by Valentina Burolo, the first feature film by Andrea Andolina  “I viaggi del principe” and “Honour the child” by Elisabetta Bernardini.

Synopsis of “Interview with Rossella”: This Short Film is of dramatic genre. The protagonist is Rossella, an old lady, mother and grandmother, very busy and full of interests. We will get to know her through the messages left on her answering machine by relatives and friends.

As soon as I read the short story “Interview with Rossella” I realized that an interesting and original short film could have come out of it. I felt it was a challenge worth accepting: telling a part of a woman’s life through the messages on her answering machine. However, it was a true challenge. How could I get through to the audience Rossella’s character, a character which we never see in front of the camera. How could I make the audience “feel” her presence and movements around her apartment  (the only location of the whole short film)? How could I give body to a story where – in physical terms – no character actually appears? I thought that a sequence shot was my best beta. The objects of a house change their position at each movement of the camera, and this is how the audience senses the woman’s presence and everyday movements, and the passing of time as well. And everything is highlighted by the messages which are left on the answering machine by friends and relatives.

Do you want to watch “Interview with Rossella”?
Click here…